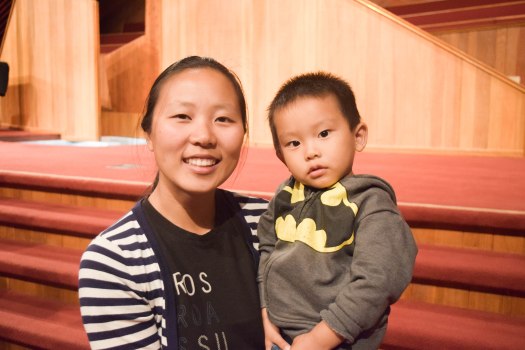 I love hanging out with Chris and our two little boys and peppering them (okay, mostly the younger one) with kisses and hugs.

My family moved to America when I was just seven years old. Thanks to the kindness and outreach of some Christians, my parents were exposed to the gospel very quickly after we had moved to America. They became believers about a year afterwards and quickly got involved with the local Chinese church. As I grew up in the church, I was taught the gospel very early on. God was gracious to grant me a soft heart from an early age and I do not remember ever questioning or rejecting what I had heard. I knew I was a sinner and that I needed Jesus to save me from my sins. While I do not have a specific date I can pinpoint to, I believe God saved me at some point during my elementary school years.

While I was taught the gospel, the churches we attended did not go much deeper than that. As a result, I did not understand that as a Christian, I was called to a holy living. I also did not understand why I did what I did (such as attending church) except that it was what Christians did. This all changed once our family moved from Ohio to California the summer before my eighth grade. At our new church in California, the youth group I began to attend had just hired a youth worker who was also a student at The Master’s Seminary at that time. He began to teach us from the Bible and challenged us to not only read the bible on our own but also to look into God’s Word to affirm that what he taught was true. God used my youth pastor at that time to help me dig deeper into Scripture and to challenge my way of thinking as well as my lifestyle. Initially I actually did not like what was taught because a lot of what he said just sounded so foreign and offensive to me. But as I actually began to look into God’s Word, I realized that it was because my mind had been filled with the world’s wisdom that I had initially disliked the truth that was being taught.

Just as I was starting to actually like my youth pastor, he made a decision to leave our church due to doctrinal differences he had with the leaders of our church. His sudden departure marked the beginning of a time of tension between the youths and the leaders of our church. It seemed almost every week there was some sort of disagreement or issues that went on unresolved. As the conflict continued on, we even began to have arguments amongst ourselves.

God used this to help me see the pride that I had built up in my heart due to the bible knowledge that I had begun to learn at that time. What I learned should have humbled me. Instead, it caused me to be proud and I looked down at those in authority over me at church and at home. God was gracious in using His Word to teach me that true wisdom is not one that causes disorder and is marked by jealousy and selfish ambition, that was the world’s wisdom. But the wisdom from above is pure, peaceable, gentle, open to reason, full of mercy and good fruits, impartial and sincere (James 3:16-17). It was God’s grace that I did not act out in greater rebellion during this time.

Coming into UCLA as a freshmen, God gave me a desire to learn how to grow in true spiritual maturity, not just in head knowledge. I was blessed to have a small group leader who was faithful to point out sin in my life, to reveal to me weaknesses I was blind to and to rebuke me when I needed it (even if it caused me to cry). It was during the four years here that I learned what it meant to be committed to the church, to faithfully serve other believers, and to cement my convictions in God’s Word. I’m thankful to the Lord for saving me, sanctifying me and continuing to do so. Thank you Lord Jesus.